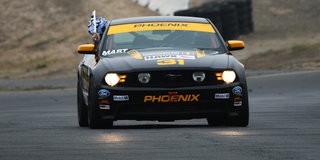 SONOMA, Calif. (Oct. 21, 2018) -- Race drivers are trained to keep their eyes “up,” always looking ahead down the track. But Marshall Mast, of Narvon, Pennsylvania, admittedly spent nearly 75 percent of the Touring 3 (T3) race focused on rearview mirrors as he made his way to victory and his first Sports Car Club of America® National Championship during the 2018 Runoffs at Sonoma Raceway in California.

Mast, who is also a semi-truck driver for the Phoenix Performance race team, qualified on pole and moved to the lead Sunday morning in his No. 31 Phoenix/Hoosier/Hawk/Ford Ford Mustang GT.  Mark Drennan, in the No. 10 TFB Performance/WRR BMW SpecE46, fell in behind Mast, and the No. 1 Fiesta Auto Group/Hoosier/G-Loc Nissan 350Z of Derek Kulach secured third.

In the first couple laps, the top-three drivers were able to put some space between themselves and the rest of the field. Drennan put pressure on Mast early, but Kulach then filled up Drennan’s rearview mirrors. That allowed Mast to scoot away a bit. But just past the race’s halfway point, Drennan was able to shake Kulach and catch back up to Mast.  And at one point, working through traffic, Drennan was able to get the nose of his car inside Mast’s and the duo were side-by-side for a bit.

Drennan kept the pressure on Mast for the back half of the race, but wasn’t quite able to get the job done as Mast crossed the finish line first by only .531 seconds.

Drennan, who won the Runoffs Spec Miata race Saturday, claimed the runner-up T3 spot. And while he agrees the race was both fun and exciting, it’s also a little disappointing for the man who considers Sonoma Raceway his home track.

“I tried my hardest,” Drennan said. “But it feels horrible to lose.”

While Mast and Drennan were sorting out first and second, a great battle for the final T3 podium spot developed behind them. Kulach had been caught by Olivier Henrichot in the No. 77 Rhom Innovations/Hard Motorsports BMW SpecE46. But Henrichot faded and was passed by Eddie Nakato in the No. 28 AR Auto Service/Adrenaline Racing BMW SpecE46 racecar. He then got by Kulach as the two worked through traffic in the waning laps to earn his first-ever Runoffs podium appearance.

“It was a bit of a longshot for us. We knew we didn’t have the outright pace to be out front,” Nakato said. “The key was to stay clean and stay in the race, and it did pay off.”

Kulach was able to bring his car home in fourth, and Henrichot was fifth.  The Sunoco Hard Charger award went to William Hendrix, in the No. 101 Aponte Rios Racing Nissan 350Z, who started 14th and finished in the 10th position.

Live, online video coverage of Runoffs races, presented by Mazda, is available throughout the three days of competition at SCCA.com/live. An audio race call, supplied by the Super Tour Radio broadcast team, is also available at www.SCCA.com/live, as well as live timing and scoring for each National Championship race.