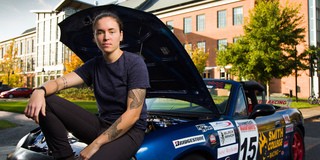 Success in motorsports is never a guarantee, but Grace Hackenberg is not your average enthusiast, and hers is no average story.

The August 2020 issue of SportsCar magazine just landed in mailboxes, so we wanted to give you a peak at one of its featured stories. You can always read the most current and back issues of SportsCar online here.

If it takes a village to raise a child, what does it take to build a racing team? For Grace Hackenberg the unlikely answer was a congregation – or two. And then some. You see, Grace, a 20-something from Portland, Ore., has a penchant for forging her own path and conquering obstacles, so when she decided racing was her future, it was hard work – and quite a few friends – that pulled her through.

Smith College, one of the prestigious Seven Sisters, graduated its first class of ambitious women in 1879, but it’s not the first place that comes to mind when the curriculum is engineering. In fact, Smith only began offering its engineering degree program in the early 2000s, but despite it being a relatively new offering, the program is eye catching.

“Smith has a really unique engineering program where you can design your own discipline,” Grace explains. “I thought I was going to be an aerospace engineer, or some other type of engineer. The summer before my senior year in high school, I saved up and took a racing school, and I knew this was it – it’s got to be racecars for the rest of my life. I was able to tailor all of my course work and projects and build a racecar. It was an opportunity to have hands-on working experience.”

The idea was there from her start at Smith, but how to turn the dream into reality? Enter a Smith alum, Joni Gang. At that time, her husband, Dean Case, was the Director of Public Relations for Mazda Motorsports. Therefore, the obvious answer was a Miata.

Grace set her sights on a multi-discipline event called the Grassroots Motorsports $2017 Challenge. The event incorporated racing against the clock on both the dragstrip and an autocross course, with the added element of preparing the car within a strict budget – two thousand and seventeen dollars – matching the year. Starting with a scrapped 1999 Mazda Miata, she worked under the tutelage of Hale Motorsports and her engineering advisor at Smith, Sue Froehlich.

There were fundamental challenges. While Grace recruited fellow students for a variety of roles from fundraising to logistics, the bulk of the car preparation labor fell on Grace herself. There was also no indoor workshop, so she improvised with a covered loading dock. It became a pioneering experience for Smith College on a variety of levels.

The team eventually made the long trek to Florida and acquitted itself with distinction, earning a seventh-place finish in the competition, catching the attention of national media outlets including Autoweek and the Wall Street Journal.

That exposure led to Donovan Motor Cars, a renowned Jaguar specialist in Lenox, Mass., and a favorable impression from company founder Brian Donovan. “This was the first time we had an engineering student as an intern,” Brian explains. “Right from the beginning, you could see the drive, the willingness to want to get into this field and work. For Grace, this was not just going to be a job but something that was really a passion for her.”

Working diligently on the shop floor, Grace parlayed her work ethic and graduation – class of 2018 – into a full-time paid appointment as a service technician.

While her daily work routine involved all aspects of customer car care, it was the after-hours attraction of Donovan’s motorsports program that spoke to her soul. The Donovan squad campaigns a trio of front-running Jaguar XK-Es in high-profile events like the Lime Rock Historics. Whenever it came to the racecars, Grace was on board. “You just had to whisper the word and she was there,” Brian smiles. “As an example of her enthusiasm, I would have to make her put in a time sheet for it, otherwise she wouldn’t even be asking to get paid.”

Dave Hathaway, who’s been with the Donovan racing program since its beginning as a one-car effort, became her mentor.

If anyone should wear the label “life-long enthusiast,” that would be Dave Hathaway. He first attended Lime Rock Park as a teenager not yet old enough to drive, shortly after the track opened in 1958. Among the variety of cars he’d later own in those early years were a Crosley, a Nash Metropolitan, a TR3, and a Corvair, all before he left for college. He’s been an SCCA worker, autorcrosser (starting in the days when they were still called gymkhanas), run RoadRallies, ice raced, and eventually moved into SCCA’s Road Racing program with a Triumph Spitfire and later a Renault Le Car.

While the technical aspects of campaigning the Jaguars addressed her professional growth, Grace still held on to her desire to see the action from behind the wheel. This time, though, she was looking for a more structured format than the Grassroots Challenge. Building on her prior experience, a step into racing with the SCCA seemed like a logical progression. The former Smith College car would serve as the platform, transitioning into a full-fledged Spec Miata. But this time, Grace would work with a roof over her head, as the resources of the Donovan shop were available off hours.

While Grace’s extended family enthusiastically supported her aspirations, on the financial side she would be on her own. Dave Hathaway’s early racing partnership had been called Parsimonious Racing, and that discipline would come to the forefront once again.

Pittsfield, Mass., is something of a crossroads for SCCA geography. Out on the western end of New England Region, many enthusiasts gravitate toward the events run in nearby upstate New York by the Mohawk-Hudson Region, so Dave’s rich experience was also expansive. It put venues such as Lime Rock Park, Thompson Speedway Motorsports Park, and Whiskey Hill Raceway within easy reach.

To get the project rolling, former SCCA Area 10 Director and Miata racing expert Tom Campbell (who crews for his brother Charlie Campbell, who put on a spectacular run at the 2019 National Championship Runoffs in F Production, crossing the stripe just 0.096sec behind the leader) completed a thorough evaluation on what it would take to get the car up to SM specifications. And, thus was born The Gracie Project.

Working around a calendar crowded with events for the Donovan Jaguar team, the first goal for Grace’s Miata was October 2018 for a CRE (Club Racing Experience) at Thompson Speedway. It was time for both Grace and Dave to get creative.

Around the same time The Gracie Project was taking shape, Pastor Tim Weisman came to Zion Lutheran Church with a vision to move his congregation into greater involvement with the community. Racecars need wheels. Dave thought, “Why not apply for a grant through Zion’s youth fund?” Unorthodox as it may seem, Pastor Tim and the church council agreed. In return, Zion Lutheran Church received prominent placement on the Miata’s front wheel wells.

Grace is full of praise for the CRE. “The best possible path for young racers is to do the CRE, to have real wheel-to-wheel racing experience, and to get immediate feedback from instructors who are out on the track with you,” she enthuses.

This first serious track outing also showed where the Miata would need more preparation. Rather than opting for a professional race shop rebuild, Grace undertook freshening the powerplant herself. In between his own two-car race prep, Charlie Campbell squeezed in a transmission rebuild at no cost.

Racing safety is better than ever, but it comes at a price. Borrowed equipment may have been acceptable for the initial CRE but being properly outfitted for a more extensive race schedule in 2019 became a necessity. Here was another occasion where Dave Hathaway’s local connections, and Grace’s German heritage, struck a responsive chord with an unlikely patron.

The German American Club of Berkshire County was in the midst of a merger with the Adams Historical Society. With some legacy funds that would not be part of the new arrangement, one of the last orders of formal business for the German American club was a grant to purchase Grace’s race gear. A banner across the back of Grace’s suit is among the last vestiges of the organization. Bob Hebert, an SCCA racer going back to the days of the original Formula B and now one of the Donovan Jaguar drivers, gifted a HANS. GT-Lite racer Wilson Wright provided a transponder.

Again, The Gracie Project became a community effort. Alice Belden, whose late husband Dave was a stalwart of the New England Region racing scene back to the 1960s, made a bequest that covered a major portion of the cost, and then Pastor Tim and Zion Lutheran stepped up to meet the goal.

The Lime Rock race introduced Grace to the thrill of wheel-to-wheel competition, and also some of the consequences as she got caught in an incident. There was no noticeable damage and the officials deemed it a racing incident, clearing the way for her to continue her quest.

A demanding schedule built around her responsibilities at Donovan limited her summer track time to some valuable testing at Monticello Motor Club thanks to an arrangement between team principal Donovan and Jason Rabe, another driver on the Jaguar squad. Perennial SCCA contender Ken Payson then kicked in some additional track time at Thompson.

The last chance for Grace to complete her licensing was NER’s season closer at Thompson in October 2019. Anxious to maximize her track time, Grace entered both Spec Miata and STL. The ambitious plan was not without its challenges. The Miata seemed to have an issue getting its power to the ground, which ultimately proved to be due to a slipping clutch. Nonetheless, Grace persevered and made it cleanly – if not quite as swiftly as she hoped – through the weekend.

With that, The Gracie Project was complete. For Dave Hathaway, it was a tribute to 50 years of SCCA involvement, harkening back to his first SCCA Driver’s School at Thompson in the fall of 1969. “For me, the whole project was to remember the past and all the great people who helped me and are lifelong friends.”

With her SCCA competition license in hand, it was time for another chapter in Grace Hackenberg’s quest. Immediately following the Thompson race, she packed her belongings – and the Spec Miata – for a return to Oregon. Back home in Portland, she’s already landed an assignment with Ivey Racing Engines and also made a very favorable impression with the Cindi Lux SCCA Pro Racing Trans Am team.

With the goal of earning her SCCA racing license achieved, Grace offers this assessment of her skill set: “I’m much better as a mechanic than a driver right now. Driving has been a great learning experience, learning about setup and then feeling these things that I’ve read about and talked about.”

In the bigger picture, Grace would like to find her way to the pro ranks like IndyCar or Formula 1, though she’s fully cognizant of the opportunities in SCCA Pro Racing and IMSA that could propel her along. But wherever the road leads, Grace – backed by quite a community – has the drive to get there.